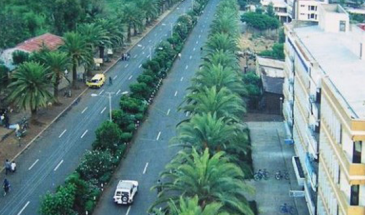 Founded during the first decades of the 20th century at the southern tip of Lake Tana and along the banks of the Blue Nile, Bahir Dar has gone on to become the foremost tourist destination of north western Ethiopia. The city has an altitude of 1,830m above sea level and a tropical climate with an average temperature of 19oc.

You can spend days strolling along palm-lined avenues, lakeside vistas exploring the Nile, and the Woito clan’s village, viewing spectacular sunset and riding a bicycle. St. George Church and the 16th-century one-storied Portuguese building in the same compound is also worth visiting.

One of the largest markets in Northern Ethiopia found in Bahir Dar. If you want to buy handicrafts like jewelry, woven and embroidered garments, ox-horn cups, grass baskets/ Agelgil/ at a very reasonable price, Bahir Dar open-air market has them all. The market also offers a unique opportunity to look at the hair, clothing and market exchange styles and other indigenous culture of the local community.

Known locally as Tis-Isat - 'Smoke of Fire', the Blue Nile Falls is the most dramatic spectacle on either the White or the Blue Nile rivers. Four hundred meters (1,312 feet) wide when in flood, and dropping over a sheer chasm more than forty-five meters (150 feet) deep, the falls throw up a continuous spray of water, which lightly showers onlookers up to a kilometers away. This misty deluge produces rainbows shimmering across the gorge and a small perennial rainforest of lush green vegetation to the delight of the many monkeys and multicolored birds that inhabit the area.

Thirty-seven islands are scattered about the surface of Lake Tana, out of which some 20 shelter churches and monasteries of immense historical and cultural interest. These churches decorated with beautiful paintings and house innumerable treasures. Because of their isolation, they used to store art treasures and religious relics from all parts of the country. Access for some of the churches closed to women, although they allowed to land on the banks of the island but not permitted to proceed further. However, women are permitted to visit churches on Zeghne Peninsula and nearby church of Ura Kidane Mehret, as well as Narga Sellassie. Kebran Gabriel: is renowned for a magnificent manuscript to the Four Gospels, which believed to date back to at least the late fourteenth or early fifteenth century.
Ura Kidane Mehret: is more decorative with a huge, conical thatched roof painted with scenes from Biblical lore.

Daga Istifanos: considered one of the most sacred place on Lake Tana, and said to have served as a temporary hiding place for the Ark of the Covenant. On this stands the church of Saint Stifanos, which houses the Holly Madonna, painted around 1434. The real historic interest lies in its treasury where there are glass-sided coffins containing the mummified remains of several of the former emperors of Ethiopia. 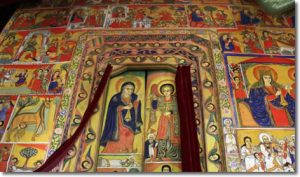 Tana Cherkos: this ancient monastery is found on the eastern shore of Lake Tana. Tradition tells us that the holy family of St. Mary rested here under a wall during her flight to Egypt, and stayed for three months and ten days. The monks claim that they owned a necklace, which she left when she departed. It also said that the monastery was a sacred place of the Jews. Menelik the Jewish nobles, after fleeing from King Solomon, and I brought the Ark of the Covenant to this monastery and built a temple over it, which was decorated with precious stones. Six hundred years later, the Ark was brought to Axum.

There are no reviews yet.

Be the first to review “Bahir Dar” Cancel reply