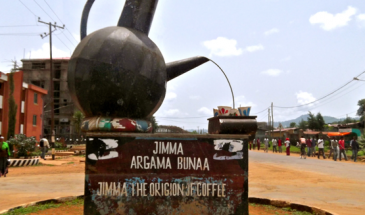 The western part of the country is still relatively wild, but not devoid of attractive historical and natural sites. Western Ethiopia is a…

The western part of the country is still relatively wild, but not devoid of attractive historical and natural sites. Western Ethiopia is a truly extraordinary place to visit with superb scenery and colorful culture, and yet the undiscovered place of Ethiopia. Between Jimma and Gambela, wild forests and vast coffee plantations shape the landscape. Major sights are the Jimma Museum and the former Palace of the Kaffa King Abba Jiffar city. The fascinating costumes, colorful ceremonies and celebrations, arts, crafts, music, and dance of Gambela, and nearby Surma people along with the natural forests in the western part will take one’s breath away.

Menagesha Forest : To the west of Addis Abeba once you pass the town of Sebeta, you would see the oldest park in Africa with plantation areas, forest rich with flowers, smaller trees, birds and animals. For more on Menagesha forest please refer back the Trekking and Camping section of Adventure Tourism.
Gefersa, reservoir, a man-made lake, hosts a number of visiting and indigenous birds such as pelicans, cormorants and Egyptian geese

Addis Alem : Once a palace now Debre Tsion Church (known as the southern Axum by some due to the attractive rectangular architecture which was common in the Northern part of Ethiopia) was built by Menelik II to be the next capital of Ethiopia moving his royal residence from Mount Entoto, though the king abandoned the idea and returned to live in his previous home.

Mount Wonchi Located on the dirt road connecting Ambo and Wolisso, Mount Wonchi is a 3,386-meter dormant volcano with a beautiful caldera which encircles a 4 Square Km crater lake on which small islands can be seen, one of which is the home of Wonchi Kirkos Monastery. This monastery is said to have been built by Emperor Zara Yakob in the 15th century. Wonchi Crater Lake and it’s surrounding described as a green paradise are one of the best sights for nature admirers. Wonchi is 157 Km to the west of the capital or 32 Km south of Ambo and can take about one hour…

Ambo (Hagere Hiwot) – home to Ethiopia’s most popular mineral water, Ambo has located about 125 Km or a two and half hour drive west of Addis Abeba. A therapeutic hot spring that lie in the town center and accompanying swimming pool surrounded by lawns and shady trees makes it an ideal camping site for an overnight stay or just a day trip.

Jimma was founded by Aba Jifar, who was the descendant of one of the five kings in the former Gibe Kingdom. It is believed that Aba Megal, the ancestor of Aba Jifar, was elected by the other four Gibe kings to be their spokesperson when dealing with the central government. No one really knows how the Aba Megal family became the ‘representative’ of the Gibe kings rather than only their spokesperson. This gradually diminished the importance of the other four kings.

The Aba Jifar family played a very important role in spreading Islam to that part of the country. As a result, Jimma, is the center of learning for the Muslims of the western Ethiopia. Although Jimma is the center of trade, the actual palace of Aba Jifar is at a small town called ‘Jiren’ some 15kms north of Jimma. While almost all the residents of Jiren are Muslim Oromos, more than 80% of the residents of Jimma are peoples from the neighbouring ethnic groups such as the Dawro, Kafficho, Janjero, etc., who are predominantly Christian. Jimma was redesigned by the Italians during the Italian Invasion. Although the city was modelled after the Italian city of Napoli, the Italians used to call it ‘piccolo Roma’, the little Rome.

Jimma may have somewhat lost its lustre and past glories, but it is still a commercial city that passes through most of the coffee brands coming from that region. Moreover, the region of Kaffa is universally recognized to be the origin of coffee, which is correctly termed the ‘green gold’. This name is a very fitting one in the case of Ethiopia, as coffee is responsible for the largest portion of its annual revenue.

Gambella National Park is in the center of the Gambella Region. It lies between the Baro and Gilo rivers, the Baro River forming the northern boundary, 15 km south of Gambella town. The center of the park, Abobo, is 82 km south of Gambella town. The park is the largest protected area in Ethiopia. The general topography is flat with some areas of higher ground where deciduous woodland and Savannah occur. The higher areas are often rocky with large termite mounds.

The park also supports extensive areas of wet grassland and swamps with grasses growing over 3 m tall. Other important habitats include the rivers, their banks, and the oxbow lakes. Traditionally, the Anuak and Nuer people who live in the area graze their animals throughout the park, grow a few crops on the riverbanks and hunt for game-meat. Presently many refugees from southern Sudan have moved into the park, and some of the settlements set up for the highland people brought to the Gambella plains after 1984?1985 drought and famine have remained populated. More than 230 species have been recorded in the park. Balaeniceps rex was recorded in the early 1960s, 20 km west of Gambella. There are recent anecdotal reports of the species breeding in the Abobo area, suggesting that it may be present seasonally in swamps within the park. Acrocephalus griseldis was recorded regularly between 1969 and 1976, but its status is unknown.