The Capital of Africa

Addis Ababa is centred at the heart of the country; is graced as Africa’s diplomatic capital with the presence of the head quarter for the African Union, United Nations Economic Commission for Africa (ECA), a seat for numerous embassies and is the port of entry for most travellers.

The bustling capital of Ethiopia, Addis Ababa is very much the centre of this diverse and delightful country. For a start, it geographically sits in the middle of this large nation and, at 2355m above sea level, occupies an elevated position overseeing large swaths of the rest of the country. The city itself has a population of about 2.7 million people and the urban area of Addis Ababa is home to around 4.8 million people. 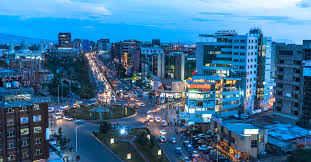 Addis Ababa is also the cultural hub of Ethiopia with several important museums stationed, as well as major universities and many Ethiopian Orthodox sites and treasures. And Addis Ababa is also the business hub of this otherwise very rural country. As such, it’s home to the movers and shakers of this quick developing nation, the young and educated as well as a small but growing middle class.

The National Museum of Ethiopia

It is made of stone materials. The second floor displays materials on natural sciences, anthropology, and archaeology, as well as fine arts. The third floor contains ethnological materials. There are also replicas of the fossils of an upright walking hominid found in Hadar. Ethiopia has a long history. 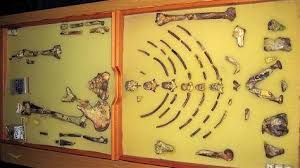 It is said that the locals believe that Queen Sheba, who had a son with Solomon in the Old Testament, is the country of Ethiopia today. The ancient country of Axum in the first century AD left many monuments. In modern African history, Ethiopia is the only country that has not been completely colonized. Their King Menelik II defeated the invading Italian army at the end of the 19th century and forced Italy to recognize Ethiopia’s independence. The National Museum is a small four-story building with simple furnishings and limited exhibits. There are some pottery from ancient history, several stone statues, and a few bronzes (but only one oil lamp for dog hunting and deer hunting is considered to be beautiful, and the rest are relatively simple ), a few stone tablets with weird characters, and more than ten gold and silver coins from the Axum period.

The Holy Trinity Cathedral is an important religious resort in Ethiopia. It was built in the early and mid 1900s. The former kings of Ethiopia, Haile Selassie, and his wife were buried here. The black granite mausoleum in the church is very worth seeing. The tour guide explained that there will be regular singing every day, and sometimes alms to the poor. The outside of the church is very sloppy and suitable for taking pictures.

The church has a clear occupational Baroque style, very beautiful and atmospheric. The stained glass paintings in the church, depicting many classic stories from the Bible. This church has a lofty status in Ethiopia’s Christianity that you must vistit it.

Guided walking tour in Entoto Natural Park. Apart from walking, you can do some interesting activities like Cycling, Horseback Riding, Go-Karts, Zip-lining, Archery, and Paintball. The eucalyptus trees carpeting the mountain, and the remarkable story behind the foundation of Addis Ababa; the park is clean, safe and a place to enjoy nature. 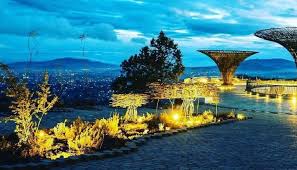 A green location.. Serene and peaceful, overlooking the booming infrastructure of Addis baba, has some old churches and some traditional shops, a must visit in Addis baba; Because Ethiopia is a plateau in Africa, this country has cool weather and has a completely different experience from the high temperature in African legends. This country should be a relatively comfortable country, at least the temperature is suitable for human life, so it is so ancient. 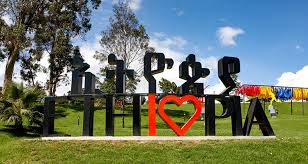 After a convenient hotel or airport pickup, Explore Unity Park at 4 kilo Grand Palace, the Park features a wide Banquet hall made of wood and leather ropes, the Throne House/hall that the monarchs used to give audience to and confer with the nobility and foreign dignitaries, Emperor Menelik II Palace Complex, Regional states pavilions, Traditional/Indigenous garden which offer a brief look into local house-building techniques and numerous indigenous plants; Unity Zoo Traditional Garden and Children play ground etc…

If you’re a market lover, one place you can’t miss. It’s considered Africa’s biggest market, an open air sprawl of vendors that goes on for kilometers; it’s one of those markets that weaves in all directions and you never know what you are going to stumble into or what you’re going to find; at the market there is a section for just about anything you can imagine.

Getting to Addis Mercato; The first challenge is actually getting there. The streets that surround the market are just about always choked. Whether you’re in a taxi, bus, or minivan, it’s much quicker to jump out of the vehicle and start walking. Just be extremely careful when you’re walking on the roads around the market. Due to such heavy and never ending streams of pedestrian traffic, drivers have no choice but to just gun it and go when they have an inch of space, without paying any attention to walkers. Navigating the market, with the many different sections, and the continual flow of vehicles, people, and livestock, can be a little overwhelming – but it’s an amazing site to see.

Following on from the Red Terror Museum, another of the top museums in this city and certainly one of the best things to do in Addis Ababa is to explore the Ethnological Museum.

Addis Ababa’s Ethnological Museum is housed within the main university campus, the grounds of which are gorgeous and make for some very pleasant surrounds. Located on Algeria Street, vehicles can’t enter the university campus, so getting dropped off outside and then strolling through the green gardens here is a really lovely way to begin your visit here. On arriving at the museum, you’ll also be greeted with a beautiful façade as this building was once the official house and palace of Emperor Haile Selassie – the last Ethiopian King.

One of the interesting things about Addis Ababa is that this city really does seem to lack a centre, instead of all its attractions, markets, churches and museums are spread out across different zones, making a discernible tourist hub something of a misnomer here. Were there to be one central region to this city however, it would probably be Meskel Square. Home to one of the most important Ethiopian Orthodox festivals of the year, Meskel Square is normally filled with traffic and a rattling metro overhead, but on the 26th of September each year, the Meskel religious festival takes places right here… and it’s one of the most important dates in this faith’s calendar.

The Meskel Festival is a colourful affair which sees thousands of believers descend on the square to gather in colourful robes and celebrate the discovery of the true cross – the one Jesus was crucified on – by St Helena in Jerusalem in the 4th Century.

After the Holy Trinity Cathedral, the next most important Ethiopian Orthodox site to visit in Addis Ababa is that of the St George Cathedral. Located on the northern edge of Piazza, at Menelik Square, this religious structure is famous for its octagonal shape, as well as for the numbers of devotees who come here each day to pray and pay their respects. Often found in silent contemplation at the gates of the church. 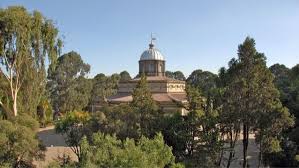 as well as inside, visiting this place of worship is certainly one of the best things to do in Addis Ababa, because of the fascinating insight, it provides into Ethiopian culture, which is still deeply religious in an almost mystical way; with its importance as a historical site too; due to the fact, it was the coronation location for some of this country’s most famous rulers. The St. George Cathedral also has a museum attached to it, with an imperial throne on the display and some beautiful stained glass window artwork.