Off the Beaten Tracks

Off the beaten track

A usual route or destination, as in you will found a great vacation spot. This term alludes to a well-worn path trodden down by many feet and was first recorded in 1860, although the phrase beaten track was recorded in 1638 in reference to the usual, unoriginal way of doing something.

Along the beaten track, we will follow commonly unused by or unknown to most people, as of a course, route, or trend. We know people say to be as adventurous when travelling, but we like to stay along the beaten track in places we do not know
very well.

We generally stay along the beaten track with books, we are not fond of reading those that get too weird or are meant for academics. To be little known or in a remote or lesser-known area, as of a place or business; we will definitely be able to get a table at that restaurant; it’s really off the beaten path. We chose that rarely visited attraction sites in Ethiopia as vacation spots because we knew they are off the beaten paths and will give us some much-needed solitude.

We, Team of Mimosa Ethiopia Tours very well realize that you’re off the beaten track tour is going to bring your satisfaction. We will facilitate everything based on your interest and request, because you are expecting a better service and you can explore other of the beaten the tracks as sub items on this website…

Gambela was founded because of its location on the Baro river, a tributary of the Nile and the only navigable river in Ethiopia, which was seen by both the British and Ethiopia as an excellent highway for exporting coffee and other goods from the fertile Ethiopian Highlands to Sudan and Egypt. It was inaugurated as a port and custom station under the name Gambella in 1907 and Britain took the administration of the commercial station. From 1907 up to the independence of Sudan in 1956. 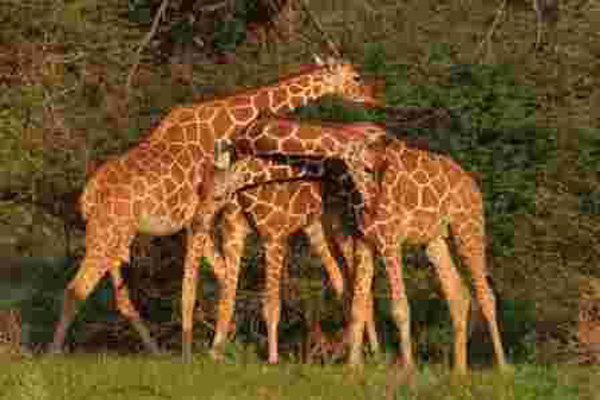 Gambella was a very bustling city and optional outlet to Ethiopia. It was strategically and commercially very important city. Coffee, skin, beeswax and cotton were among the major item exported via the river port of Gambella. Due to the growing tension between the Sudan liberation front and Ethiopian Government of the Derg Era the port is closed and Gambella loosed its strategicall importance for commerce. Currently among the ethnic group in Gambella (Majangar, Anuak, Nuer, opo), the Anuak and Nuer are predominant in the day today activity of Gambela .The town also boasts an airport and have the potential to develop using its abundant resource. The only Navigable River in Ethiopia, Baro, is the cell of Gambella still up to now. The Gambella National park is a dwelling for large mammals like Elephant, lions, leopards, giraffes, buffaloes, tiang, roan antelopes and water bucks. The common bush buck, orbi, lesser kudu and the white-eared kob can be best spotted easily southwest of Gambella along the banks of the Baro River.

The Halaba’s cultural values, norms, customary institutions, social systems, and methods of economic activities reveal ways of living and sustaining the daily life of the people. Halaba is one the ethnic groups in south regional state, with its unique culture and history.

The Halabas have shared various cultural practices and life style with various other peoples‟ cultures. The cultural interaction established with others and the contacts with outsiders who have influenced the culture, customs, institutions and artistic heritages of the nationality in some extent. 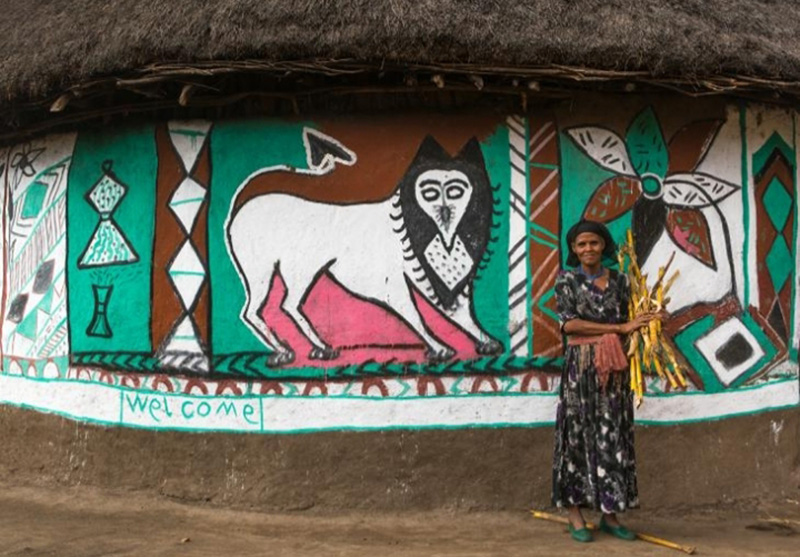 In supplement of the movement of Halaba from their area of settlement to other places as a result of Muslim Christian conflict, Lapiso (1990:45-46) stated: The Adal wars of 1524 -1543 accelerated the place of great Ethiopian ethnic migrations of 1520 to 1660. During this migration, tribal and ethnic groups of Genz, Hadiya, Wetogira, Gedebicho, Halaba, Kabena, Ulbarag, Silte, Malge Bushe and Marako partially or totally moved from their former positions in southern Ethiopia.

After breakfast, start trekking from Kulito town to Arto hot spring (3-4 hours of walk) and on the way, cross Bilate River and different landscapes. When we get at the hot spring, we will take shower with fresh water from the hot spring and install our tents for camping. O/N in community house

In the morning, walk around the hot spring to observe some bird species and continue trekking back to the town, on the way you will attend on coffee ceremony in one of the traditional huts of halaba village, after lunch visit the Fama falls before you get back to the town. O/N at Sera Lodge

The park is located about 330 km west of Hawassa, the capital of the Regional State. There is a good gravel road from Sodo to the park. The park can be reached easily from Jimma as well along with a gravel road straight south of around 110 km length. The Park is fortunate in possessing numerous rivers and streams and some small crater lakes (Keriballa, Shasho, Koka), which are one reason for the rich wildlife of the area. The Zigina River rises from the northeast highlands of the area and cross the central part of the park (north to south) and feeds the Omo River. There are also different perennial rivers crossing the park feeding the Omo River. The Shoshuma River is the main river of the park. It rises from the northwestern highlands of the Konta area, flows across the northeastern part of the park and joins with Zigina River inside the park, finally draining into the Omo River. This park is one of the relatively untouched, recently discovered and rich wilderness areas but the less visited and known park in the country. 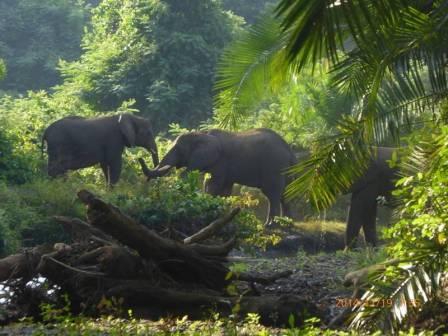 A number of cold & hot springs, historical caves, the Meka Forest (which is always with African Elephants). The park is the best site to see the African Elephants, and Buffalo in Ethiopia. The Park & surrounding area also have different natural and cultural attractions such as different hot and cold springs, lakes and caves.

37 larger mammals and 237 species of birds have been recorded in the different habitats (Highland & Riverine forest and savanna and bush lands) of the park. White-cliff chat, banded-barbet, wattled ibis, black-headed forest Oriole and thick billed Raven are endemic birds for the country.

Maze National Park is a national park in the Southern Nations, Nationalities, and People’s Region of Ethiopia. It is 210 square kilometers in size. Elevations within the park range between 1000 and 1200 meters above sea level. Maze was founded in 2005, and is managed by the Ethiopian Wildlife Conservation Authority.

Maze National Park is one of the youngest Ethiopian National parks, which is located in Gamo Gofa Zone in South West Ethiopia. The name of the park “Maze” is derived after the largest river that crosses the park. The main rivers, which are tributaries to the river  Maze are Lemase, Domba and Zage rivers. The park, which was established in 2005 was a controlled for hunting area for many years starting from the Derg regime to its establishment; and it has been called “Shambara Bazuwa” where Shambara stands for Very Wide Area and Bazuwa stands for Wilderness or Desert by the local people. It lays within the boundaries of five weredas namely Qucha, Daramalo, Zala, Kamba and Denba Gofa.

The Maze controlled hunting area was developed into a national park for its endemic mammal Swaynes Hartebeest (Alcelaphus buselaphus) of Ethiopia where the population of the Swayne Hartebeest (Alcelaphus buselaphus) is the third around the world. The park is located about 460, 235 and 22 km South West of Addis Ababa, Hawassa and Selam Ber, capital of Qucha wereda, respectively. GPS data has shown that the park covers an area of 220 square Km with altitudes ranging from 900 to 1400 meters above sea level. The landscape of the park area includes a vast plain, some sloppy areas, small hills, escarpments and chain of mountains at its boundaries.

Meteorological data obtained from Morka station, which is located 2.5 km from the park, shows the highest average annual temperature recorded is 25. 4o C while the lowest being 24. 5o C. On the other hand, the average annual precipitation varied between 802.5 mm and 1494.7 mm. The dominance of grassland and savanna grassland vegetation types is attributed to the hot and dry climate of the park, that enjoys up to 1500 mm of precipitation in highly variable quantities during the rainy months. The local climatic situation, therefore, might have favored grass species which complete their life-cycle within a short period.

The Park is covered by Savannah grassland with scattered deciduous broad leaved trees as well as Riverine association along the main watercourses. The Wild animal of the Maze National Park supports a wide range of Savannah species. So far 39 larger and medium-sized mammals and 196 birds’ species have been recorded. It is one of the three sites in the world where a good population of the endemic Swayne’s Hartebeest’s population still survive. Besides, orbi, Bohor red buck, buffalo, warthog, bush buck, water buck, greater kudu, lesser kudu, bush pig, Anubis baboon, velvet monkey, lion, leopard, wild cats, and serval other kinds of cat can easily be found in the park

It is a park with more than 450 bird species of which 6 are endemic and the excellent birding park in Ethiopia. Located at 225 km from Addis Ababa and marked by river awash from its southern and northern side. In the south of the park the Awash River gorge has amazing waterfalls. In the upper Kudu Valley there is a hot springs amid groves of palm trees. It has volcanic landscapes, dry acacia savanna and grass land of rift valley with a total of 756 km². 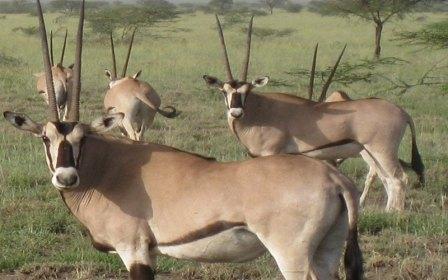 East African Oryx, Summerring’s Gazelle, Dik-dik, the lesser and greater Kudus, and Warthogs, anubis baboons and Hamadryas baboons are present in the park. Even if there are big mammals in the park currently it is difficult to spot them due to the poaching activity of the tribes in the park. The banded barbet, golden-backed woodpecker and white-winged cliff chat are among the endemic birds of the park. 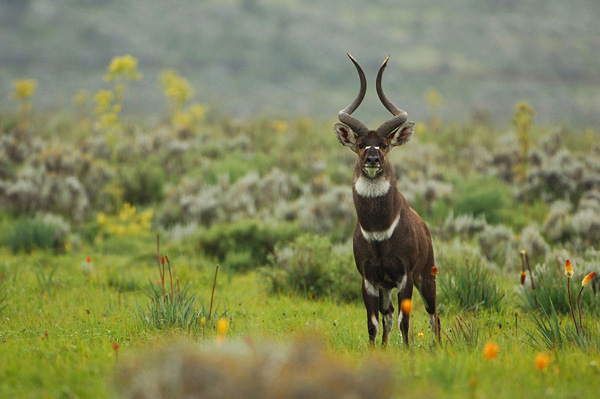 The Bale Mountains National Park offers opportunities for unsurpassed mountain walking, horse trekking, forest walks, bird watching and scenic driving. It also presents the chance to view many of the endemic mammals that reside within the park, specifically the mountain Nyala and Ethiopian wolf, as well as birds such as the Wattled Crane and Bearded Vulture. However, perhaps the primary attraction of the Bale Mountains is the simple escape it offers from city life into peace, serenity, and beauty.