Among many religions, a feast is a set of celebrations in honor of God or gods. A feast and a festival are historically interchangeable. However, the term “feast" has also entered common secular parlance as a synonym for any large or elaborate meal. When used as in the meaning of a festival in Ethiopia, most often refers to religious rather than a film or art festival. Religion plays an important part of life in Ethiopia. The Orthodox Tewahedo Church ceremonies are unique and impressive. People dress in traditional costume and celebrate festivals across the country with colorful unique ceremonies, that is really means is a long series of processions, singing and music, traditional different distinctive dances of ethnic groups, especially on  Timket (Epiphany)  and Meskel (Finding of the  True Cross) festivals which provide colorful ceremonies and celebrations.

Meskel (Finding of the True Cross-)

Meskal has been celebrated in the country for over 1600 years. The word Meskel means “cross" Meskel is celebrated by dancing, feasting and lighting a massive bonfire known in Ethiopian tradition as “Demera". Meskel commemorates the finding of the True Cross in the fourth century when Empress Helena, mother of Constantine the Great, discovered the True Cross on which Christ was crucified. 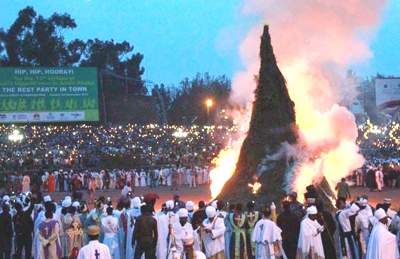 The feast is celebrated in Ethiopia on Meskerem 17 Ethiopian calendar (September 27 Gregorian calendar), 6 months after the discovery of the True Cross. The celebration of Meskel signifies the presence of the True Cross at mountain of Gishen Mariam monastery and also symbolizes the events carried out by Empress Helena.

The festivity is celebrated seriously by a church service that goes on throughout the night, with a spectacular procession, which begins at 6 AM and lasts until 9 AM. After the mass service, people go home to break the fast with the meat of chicken or lamb or beef accompanied with Injera and the traditional drinks (i.e. tella or tej). Traditionally, young men played a game similar to hockey, called Genna, on this day, and now Christmas has also come to be known by that name.

Timkat (Amharic “baptism") is one of the greatest National festivals in Ethiopian specially the Ethiopian Orthodox celebration. This greatest festival of the year falling on January 19 (or 20 on Leap Year), corresponding to the 10th day of Terr following the Ethiopian calendar. 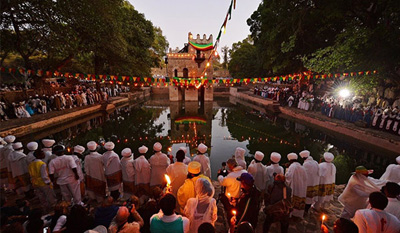 Timket celebrates to commemorate the Baptism of Jesus in the Jordan River. This festival is best known for its ritual re enactment of baptism (similar to such re enactments performed by numerous Christian pilgrims to the Holy Land when they visit the Jordan.) During the ceremonies of Timkat, the Tabot, a model of the Ark of the Covenant, which is present on every Ethiopian altar (somewhat like the Western altar stone), is reverently wrapped in rich cloth and born in procession on the head of the priest. The Tabot, which is otherwise rarely seen by the laity, represents the manifestation of Jesus as the Messiah when he came to the Jordan for baptism.

Fasika (Easter) is celebrated after 55 days severe Lent fasting (Hudade or Abiy Tsome). Orthodox Tewahedo Christians do not eat meat and dairy products for the whole 55 days. Vegetarian meals such as lentils, ground split peas, grains, fruit and varieties of vegetable stew accompanied by injera and/or bread are only eaten on these days. The fist meal of the day is taken after 3 PM (9 o’clock in the afternoon Ethiopian time) during the fasting days, except Saturdays and Sundays, where a meal is allowed after the morning service.

Day of the Virgin is one of the most revered religious figures all in Ethiopia. About 33 days annually devoted to different celebrations in commemoration of Mary. “Hidar Zion" is associated with the presence of the Ark of the Covenant in Axum and the belief that the Ark is a symbol of her womb. The fall on November 30 every year, this festival is attended by thousands of people from foreign countries and all parts of Ethiopia, making it one of the happiest annual pilgrimages in the country, the “city of Blessed Ethiopians.

The feast of Saint Gabriel (kulubi Gebriel), the Archangel, is celebrated on December 19 Ethiopian calendar (December 28 Gregorian calendar) which culminates in a pilgrimage to Kulubi, about 68 kilometres from Dire Dawa. Orthodox Tewahedo Christians mark the celebration with colorful processions and ceremonies. Pilgrims walk up the hill to the church to fulfill a vow and give gifts to the church. Some pilgrims carry heavy rocks on their back up the hill to the church.

Dire Shek Hussien is one of the Ethiopia’s most extraordinary sites of Muslim pilgrimages. Located some 592 km southeast of Addis Ababa, Sheikh Hussein is a town in south-eastern Ethiopia. 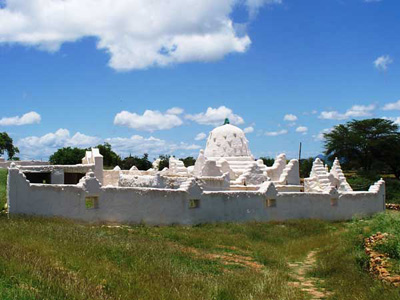 Located in the Bale Zone of the Oromia Region, it has a longitude and latitude of 7°45′N 40°42′E with an elevation of 1386 meters above sea level. Sheik Hussein Dire, the town, when the shrine is located and where the celebrations take place, is some 140 km from the city of Bale Goba and some kilometers from the caves of Sof – Omar (another Muslim shrine) and a spirits loci for pilgrimage.

Al Nejashi is the first mosque in Africa. The mosque was built in the 7th century AD and is considered by many as the second most sacred place of Islamic worship and rightly dubbed by some as “The second Meca”.  It is located north of Wukroabout 60 Kilometres from Makale, the capital of Tigray Regional Stat. Ethiopia has long enjoyed the most intimate relations Islam. When the early followers of Prophet Mohammed were denied the right to pursue their religion by the Quraysh tribe, the mercantile rulers of Mecca, the prophet had to seek a safe hideout for his followers in order to maintain the survival of his religion. 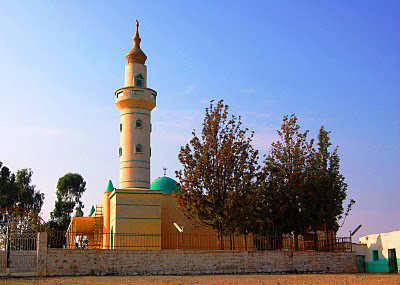 The rule of Ethiopia, or Nejashi, granted asylum to the first refugees, 11men and four wives, who entered his territory in 615. The second Hijira (flight) consisted of 101 Muslims. The Quraysh are said to have asked the Ethiopian ruler to hand over the exiles to them, but this was strongly rejected. Among the refugees were the prophet’s daughter Ruqiya, his future wives Umma Habiba and Umma Salama and his cousin and leader of the religious exiles, Ja’afar Ibn Abu Talib. Many of the Muslims stayed in the end were buried at the sacred village of Negash. The Negashi of the Habersham, as the king is known in the Arab World, died in 630 and was also buried there. Negash remains Ethiopia’s earliest and most holy Muslim centre, where there is a fine mosque, constructed recently. Many flock to Negashi for pilgrimage once in a year during the 10th day of the month of Moharem. Muslims from different parts of Ethiopia and abroad attend this two day colourful festival.

Islamic festivals have a special meaning Muslims of Ethiopia because of the historical like. Ramadan is one of the holiest periods in the Islamic calendar. Life changes dramatically during Ramadan. After breaking their fast at sun-down, people stay awake until early hours, feasting, visiting friends and praying. At dawn they eat the meal that will last them until sunset. At the end of Ramadan, the festival of Idd-ul-Fitr is celebrated. In Ethiopia, the holiday is most colourfully celebrated at Guraghe Zone and Addis Ababa.

Eid al-Adha “Festival of Sacrifice" or “Greater Id" is a holiday celebrated by Muslims worldwide to commemorate the willingness of Ibrahim to sacrifice his son as an act of obedience to God. The feast of the sacrifice- this occurs at the end of hajj on the tenth day of Zul hijja, the twelfth month of the Islamic year. Sheep, goats or camels are sacrificed on this great occasion. The joyful crowds throng the mosque for prayers- the world is alive with happiness.

The 4th holly city of Islam

Harar, which according to UNESCO is “considered ‘the fourth holy city’ of Islam," with 82 mosques, three of which date from the 10th century, and 102 shrines.  Harar is an eastern city in Ethiopia. The city is located on a hilltop at 1885 meters. For centuries, Harar has been a major commercial centre, linked by the trade routes with the rest of Ethiopia, the Horn of Africa, and the Arabian Peninsula. 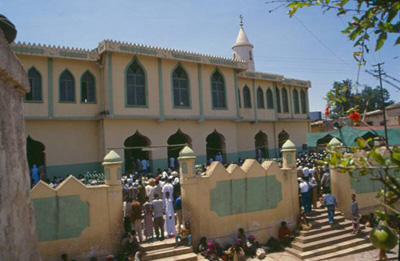 Harar is also famous for its coffees and the French poet Arthur Rimabud who lived there. The city is protected by a huge wall, and only few gates allowed people to enter. Nowadays, no more doors, just the Wall!