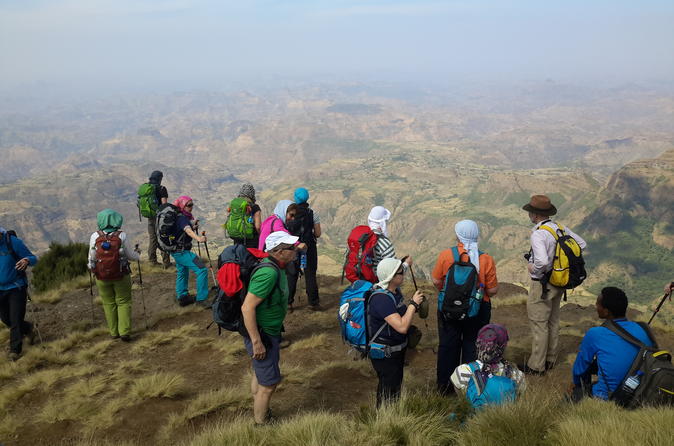 Overland adventures are not for the faint-hearted. It takes determination and a level of endurance and self-confidence. The very fact that you want to have an African Safari and a tour of discovery and exploration shows that you have what it takes to go on Adventure Tours. Nevertheless, these tours require some level of preparation in the right kind of cloth, luggage and other items required by the adventure traveler. For the sake of prudence, here are brief descriptions of what the various adventure tours are all about, together with the relative level of difficulties to be encountered.

The relatively least difficult of the adventure tours, involves persons that are so passionate about nature, that they like nothing more than loosing themselves inside Ethiopia’s vast wilderness. They want to be absorbed by open spaces, limitless skies and awe-inspiring scenery. Sport fishing in one of the numerous lakes and rivers surrounded by ideal sceneries, and caving inside one of the world’s most extensive underground caverns may also be part of this adventure.

Trekking:
The next relatively more demanding adventure involves trekking across the Semien and Bale mountains, or among the indigenous peoples of the Omo Valley. Mountain trekking requires reasonable levels of fitness as the trek involves considerable amount of walking and trekking up the mountain. The elderly may ride mules and/horses for part of the more difficult terrains. Mules do also serve to carry utilities and luggage. If you are new to trekking, it is very helpful to get some practical tips and advices from experienced trekkers who have been to your proposed sites. 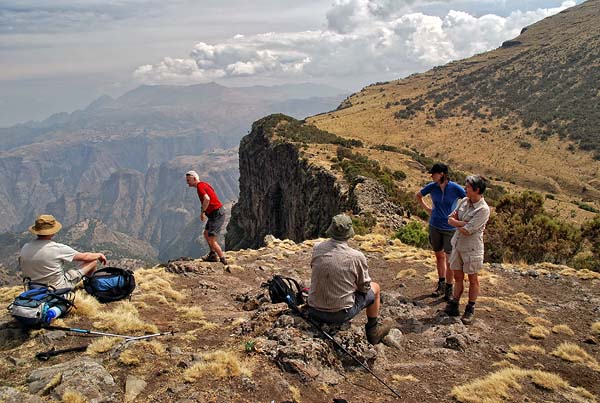 Trekking in the Ethiopian highland is very open, with no tourists stepping on your toes. You will still be trekking with a group, which will provide you with the joy of meeting and trekking with new enthusiastic and friendly fellow travelers who support one another.

Outdoor adventures such as paragliding, mountain climbing and white-water rafting require a certain amount of expertise. Hence, beginners need the support and guidance of the more experienced members. These sports are usually handled in groups and by units that have specialized in those fields and are equipped with the necessary gadgets. 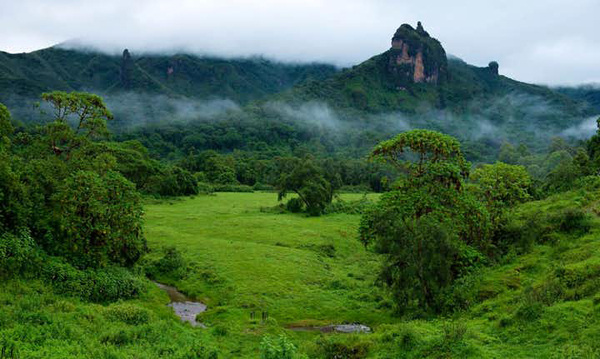 For those that live in major cities where the days are filled with hectic timetables and always rushing, the tranquility among the clean and uncontaminated natural elements is truly soothing to the spirit and mind. Persons that live in big cities where the stars are hidden with the smog from factories, find the open-air experience of the Ethiopian highlands quite rejuvenating. What more can one asks other than watching the beautiful African sunsets and sunrises!

Camping in Ethiopia is almost the only way to visit the most beautiful, undeveloped and unspoiled areas of the country. Some recognized campsites are provided in National Parks and other popular tourist areas, but finding somewhere to camp is seldom a problem. 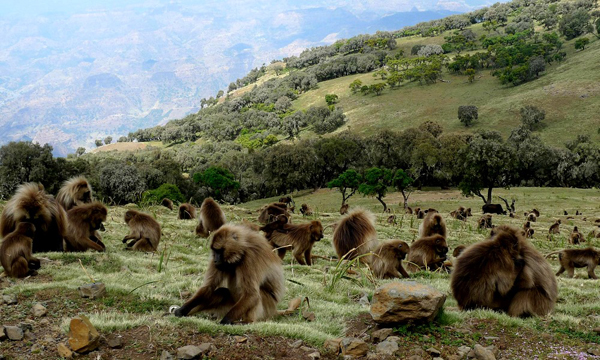 One word of caution: velvet monkeys and baboons are fond of picnics and will enter any open car or tent in a flash! In the National Parks and most highland areas, campers may pitch a tent, climb in, and enjoy a good night’s sleep, untroubled by worries of unwelcome night visitors. Country people are for the most part, pacific, hospitable, and co-operative.

Fishing
Conditions for sport fishing could hardly be better than in Ethiopia. Rivers and lakes are full of a wide variety of fish, some of extraordinary size. Ethiopia boasts more than 200 species of freshwater fish, including Nile perch, immense catfish, tiger fish, and brown and rainbow trout. Very few Ethiopians are anglers so visitors will find many unspoiled areas where they can fish in peace. A typical day’s fishing may also include the bonus of seeing families of hippo, giant crocodiles, or pink clouds of flamingos

Caving
The Sof Omar cave systems, 120 kms east of Goba in Bale region, is one of the most spectacular and extensive underground cavern in the world. Formed by the Weyb River as it changed course in the distant past and carved a new channel through limestone foothill, the 16 kms cave system is an extraordinary natural phenomenon of breathtaking beauty. The dry, cool caves contain many marvels of natural architecture, including soaring pillars of stone 20 meters high, flying buttresses, fluted archways and tall airy vaults. 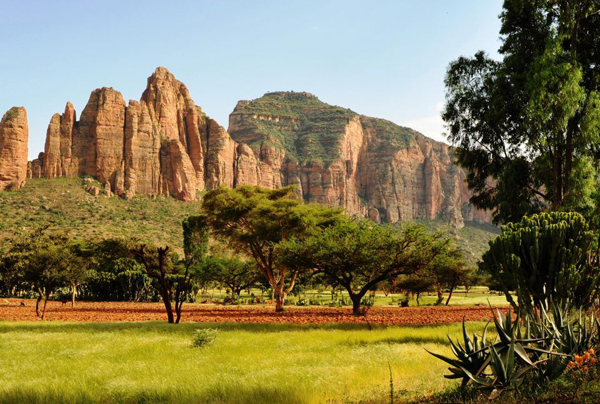 Finally the river itself is reached, flowing through a deep gorge. You can explore the caves on foot, without special climbing equipment, but preparations have to be taken. Torches or other lighting are needed. A map is also another thing that is highly recommended. The most direct route through the first part of the caves takes about an hour. Outdoor adventures are personal interest tours and as a result are conducted on an individual basis. Hence if you are interested to experience any one of the above outdoor adventures

Trekking in Ethiopia does not involve being super-fit. Horses, mules and donkeys are universal means of transport, so horse trekking has been a natural development. 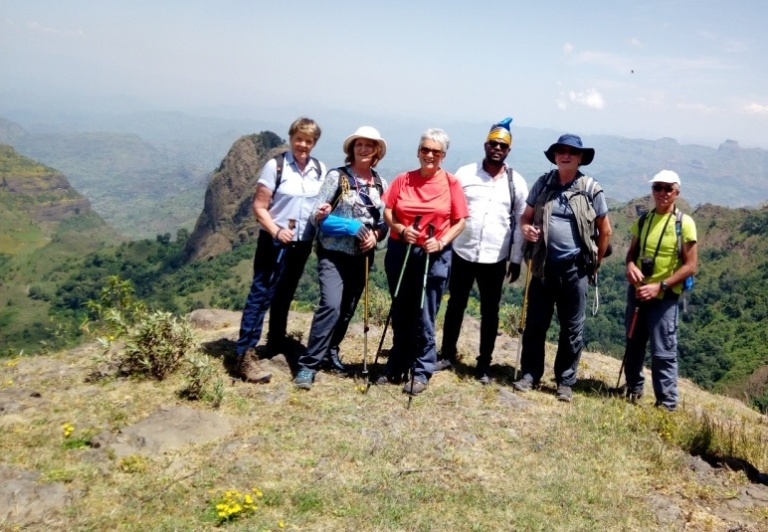 Trekking in the Semien Mountains

As the name indicates, the ‘Semien’, which means ‘North’ in Amharic, is an area of highland country in the northern part of Ethiopia. The Semein mountains National park, which is one of the principal mountain massifs in Africa, is commonly known as the “Roof of Africa”. It has been declared as world heritage site by UNESCO. 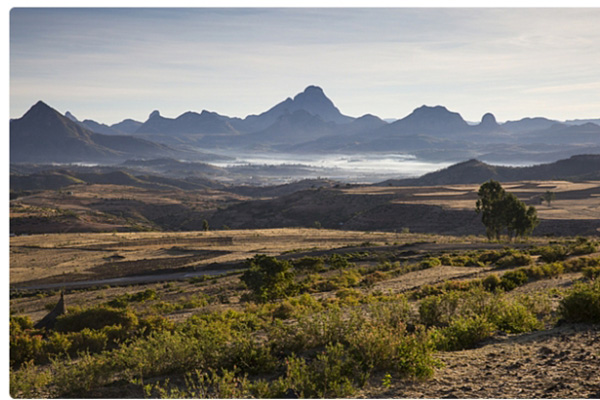 The marvelous scenery combined with the varied endemic plants, mammals, birds and the breathtaking environment make the area an ideal place of mountains trekking.

Trekking in the Bale Mountains NP

In the Southeast part of the country, the Bale National Park is the largest area of Afro alpine habitat in the whole of Africa. Bale Mountains is an area of high altitude plateau that is broken by numerous spectacular volcanic plugs and peaks, beautiful alpine lakes and rushing mountain streams that descend in the deep rocky gorges on their way to the lowlands below. It is home for various Endemic Birds and Animals. 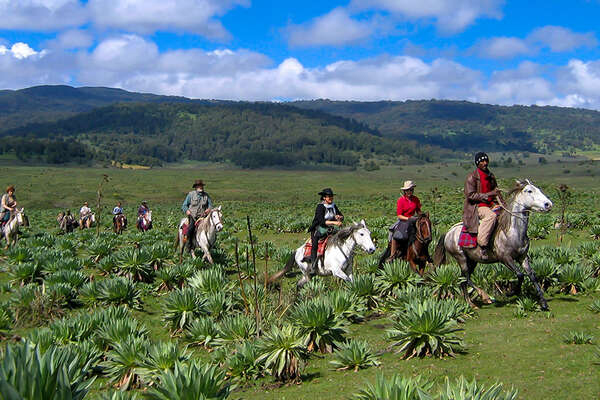 The Bale Mountains remain an untouched and beautiful world. Rising to a height of more than 4,000 meters, the range borders the southern highlands of Ethiopia. Mount Tullu Deemtu, the 2nd highest peak in Ethiopia, is 4,377 meters above sea level.

Trekking among the Omo Valley

the remote south-west highlands, east and west of the Omo Valley where strong and colorful cultures complement the appeal of scenery, flora and fauna, is another site ideal for trekking and cultural interactions.

In promotional works involving tourist attractions, superlative words such as ‘wonderful’, ‘extraordinary’, etc. are very common. In this web site, we have tried to refrain ourselves from over applying the terms. Nevertheless, there is no way we can fully describe some natural, historical and cultural wonders without using these words. One of these is the magnificent natural sceneries involving the Dalol Depression and Ert’ Ale Volcanoes. 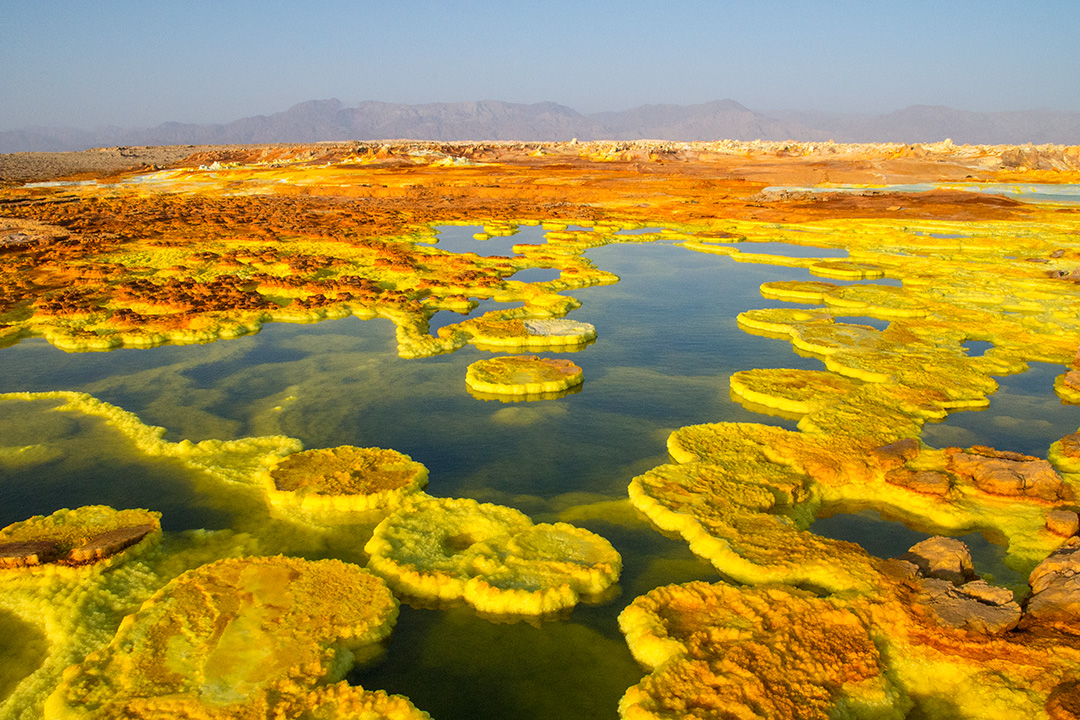 Dallol is at the northernmost extension of the [Great] Rift Valley. It is below sea level and acts like a cauldron, trapping all the heat. Dallol is a field of phreatic craters in the barren salt plain NNE of the Erta Ale Range in one of the lowest (and hottest) areas of the desolate Danakil depression. The Dallol craters are the Earth’s lowest known sub aerial volcanic vents. The most recent of these craters, Dallol, was formed during an eruption in 1926. Colorful hot brine springs and fumaroles deposits are found in the Dallol area. This is a desert with some areas that are more than 130 meters below sea level. This is special because it is one of the lowest points on earth not covered by water. There are hot yellow sulfur fields among the sparkling white salt beds. Heat isn’t the only thing people feel in the Dallol Depression. Alarming earth tremors are frequently felt. There are also several active volcanoes. 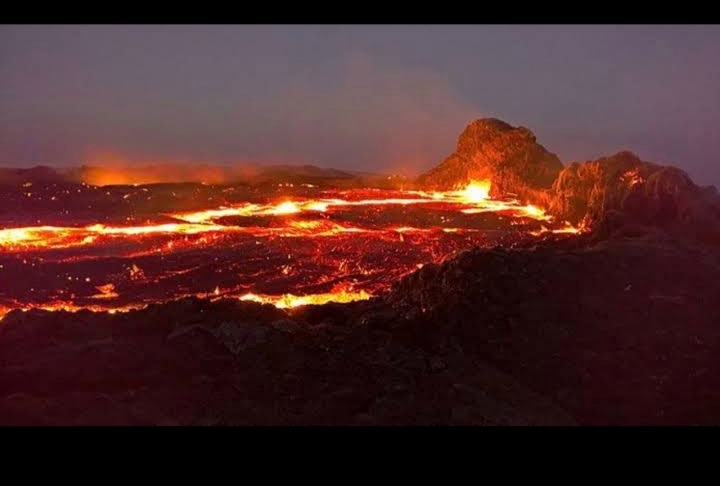 The active volcano Mount Erta Ale, (in whose crater lies the world’s only below sea level land volcano, and world’s only permanent lava lake), techno-colored landscapes, incredible mineral deposits, sulphur lakes and bubbling sulphur springs, are fascinating sights not to be missed.

how hot is it at the Dallol?

Weather wise, the hottest places on earth are the Dallol Depression in Ethiopia and Death Valley in California. Temperatures can reach as high as 145 degrees Fahrenheit (63 degrees Celsius) in the sun, and top 93° Fahrenheit (34° Celsius) every day of the year. In the summer, not a single day dips below 104° Fahrenheit (40° Celsius). Dalol holds the record for the highest average annual temperature. 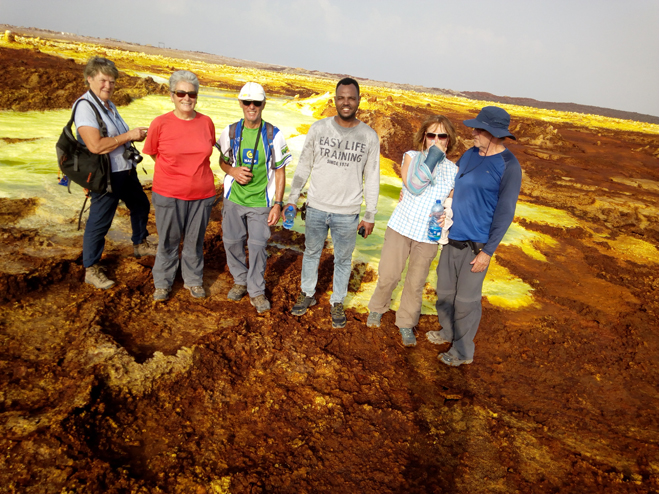 Danakil and the Afar people this inhospitable land has been home to the Afar (Danakil) people for at least two thousand years. Afar men were renowned for their ferocity and xenophobia as recently as the 1930s until which time loping off the testicles of male intruders was customary! Traditionally the Afar are nomadic pastoralists and, together with the Tigrians, are still involved in mining salt bars from the lake in the Dallol depression and carrying them by camel caravan up to Tigray, along age old routes. This is an adventurous trip, not for the fainthearted and those needing luxury of any kind. The unrelenting climate can have an enervating effect unless you are well prepared for the temperatures. This is a demanding trip in an area with little infrastructure. In fact Dallol, is one of the least accessible destinations on the planet. In many areas there are rough and sealed roads, and camel caravans are the only way to travel. Despite the harsh conditions, the Dalol Depression is a truly extraordinary place to visit with superb scenery, a fantastic experience for the adventurous traveler.  Moreover, they are unique to Ethiopia, as they are not found anywhere else.

Ethiopia has an elevated central plateau varying in height between 2,000 and 4,543 meters. In the north and in the center of the country, there are some 25 mountains whose peaks rise over 4000 meters. With such high elevation having breathtaking scenery Ethiopia is said to be the ‘Roof of Africa’ that makes For instance, the Semien Mountains are the highland containing many summits above 4000 meters and culminate in the highest point in Ethiopia, Ras Dashn, at 4630 meters, the fourth highest mountain in Africa. 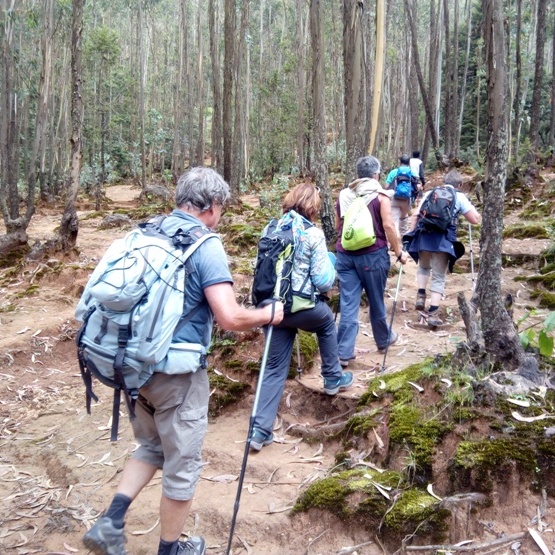 Someone’s walking seems like flying over the scenic beauty. For instance, the Semien Mountains are the highland containing many summits above 4000 meters and culminate in the highest point in Ethiopia, Ras Dashn, at 4630 meters, the fourth highest mountain in Africa. Its dramatic topography is the result of the erosion of basalt lavas, which have been calculated to be nearly 3000 meters thick. Rare species of animals, i.e. the Walia, the Semien fox and the Gelada Baboons inhabit the Semien Mountains. 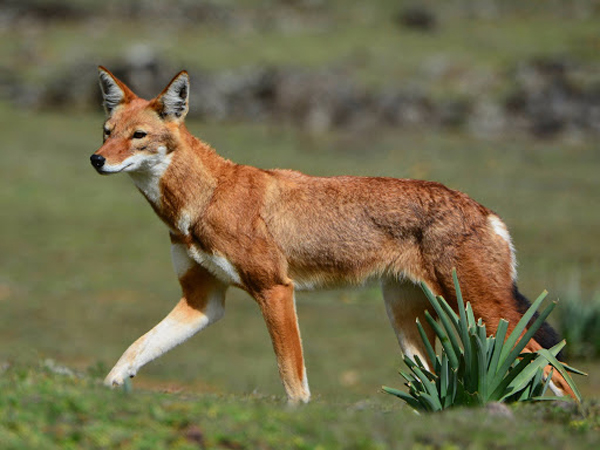 There are also lots of endemic birds and plants. Similarly, Bale Mountains National Park is an area of high altitude plateau that is broken by numerous spectacular volcanic plugs and peaks, beautiful alpine lakes and rushing mountain streams that descend in to deep rocky gorges on their way to the lowlands below. As you ascend into the mountains you will experience changes in the vegetation with altitude, from Juniper to heather moorlands and alpine meadows, which at various times of year exhibit an abundance of colorful wildflowers. 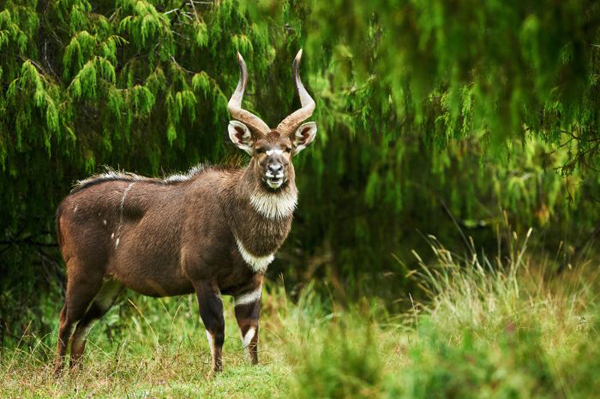 Bale Mountains National Park is the largest area of Afro-Alpine habitat in the whole of the continent. It gives you opportunities for unsurpassed mountain walking, horse trekking, scenic driving and the changes to view many of Ethiopia’s endemic mammals, birds and plants.